INSIDE: Frustrated by how often you say no to your child? What if you said yes to everything they asked for instead – just for a day? Enter the Yes day…a day where your child gets to call the shots – and you can’t say no! How does it work? I reveal all in this post! 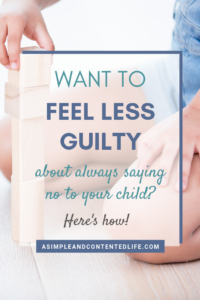 How often do you say no to your child?

I say no to my youngest A LOT. It might not always be an outright no but it’s usually something along the lines of “not right now”, “not today”, “in a minute” or “maybe later”.

Does it worry me that I say no so often? Not really. Why? Because he asks me to do things all the time. And when I say all the time, I quite literally mean ALL the time.

From the minute he gets up until he goes to bed, it’s “Mummy, can I…? Mummy can I…? Mummy, can I…?”. He just doesn’t stop – especially on the weekends! And sometimes, no matter how much he might want to do whatever it is he’s asking me to do, it’s just not possible. Either there’s not enough time, it’s not practical, it’s not something I want him to do or because he has absolutely no fear, it’s just not safe! 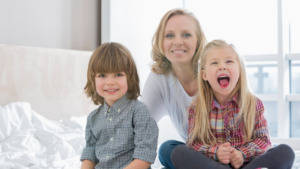 We can’t have everything we want…

But they’re not the only reasons I say no. I also say no because I believe he needs to get used to being told no. Controversial as this might sound, the reality is that in life, we don’t always get to do what we want – no matter how much we might want to do it.

Related: Mum guilt and the guilt trips we should be letting go of.

That being said, I also believe that there has to be a balance. A balance between when we say yes and when we say no. Say yes too often and there are no boundaries. But say no too often, and the pendulum swings the other way. Our kids are left feeling like they can’t do anything and that no matter what they ask, the answer will always be no. And that’s not good either.

Saying no to our kids all the time can really bring us parents down too. It can make us feel like we’re no fun. That we’re the party pooper of their childhood and that all we do is tell them what they can’t do. 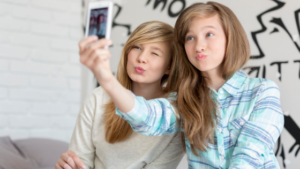 I for one know exactly how this feels. I might not feel guilty about saying no as often as I do, but I do wish that I had more time and space in my day to say yes a little more frequently. There are so many times where I want to say yes to Harrison but I just can’t. Either it’s time to get ready for school, I’m in the middle of cooking dinner or I’m up to my eyes in laundry. And in those moments, saying no can be incredibly frustrating – especially when I see the disappointment in his face.

So, how do I strike a balance? Where do I find the happy medium that helps my child get used to the word no but still allows him a little freedom in his childhood? A happy medium where I get to say yes to him a little more and don’t feel so blue about saying no all the time?

Related: Where I’m failing as a mum and why it’s okay. 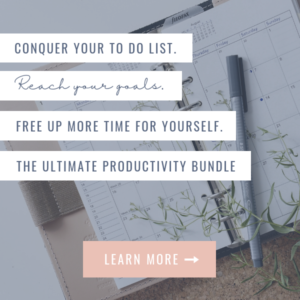 The yes day is what helps me to balance things out. A day where once a year, just for one day, Harrison gets to call the shots. He gets to make up all the rules and do whatever he wants (within reason of course) – and I can’t say no.

If he wants to eat breakfast for dinner, stay in his pyjamas all day or watch funny YouTube videos, he gets to. If he wants to go to the park wearing his Stormtrooper costume, spend an hour playing in the bath in his swim shorts or fly paper aeroplanes around the lounge all day, that’s what he does. 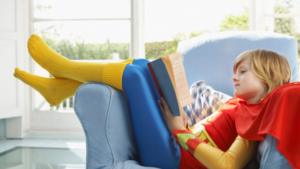 Where does the idea come from?

Originally a children’s book by Amy Krouse Rosenthal, the yes day has increased in popularity since Jennifer Garner started sharing her yes day antics on Instagram. Having been around since the book was published in 2009, I came across it two or three years ago on another parenting blog (I can’t remember which one now). Thinking it might help level the playing field in the world of “no”, I thought I would give it a go.

And do you know what? It worked! Not only did it help balance things out and relieve some of the mum guilt, it was a lot of fun too. It was such a hit – for both of us – that we’ve repeated it every year ever since.

Related: Mum guilt and the guilt trips we should be letting go of.

Making the yes day work for you…

If the thought of a yes day fills you with dread, I don’t blame you. Who knows what, if let loose and all restrictions removed, our kids might ask us to do, right?! I had the exact same thoughts the first time I did it. But if done intentionally (and with a few ground rules), the yes day can actually be a good thing – both for our kids and us.

The idea might be to let my child do whatever he wants, but Harrison’s requests still have to be within reason. And so, we always have a few ground rules. Ground rules that stop him from making outlandish requests and stop things from getting out of control. Having ground rules also teaches him that whilst the answer might be yes, there will still be some limits – because life always has limits. 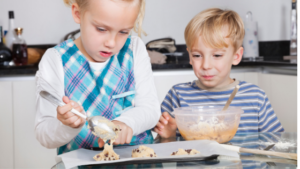 Here’s how to make a yes day work for you… 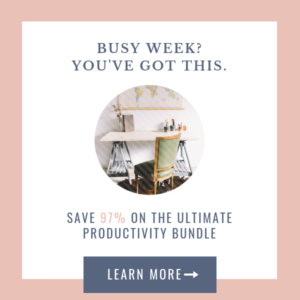 So, is the Yes day worth it?

I’ll be honest and say that I was a little worried that having a day like the yes day would undermine all the reasons I say no and that it would encourage Harrison to be spoilt, unappreciative and demanding. After all, there’s been a lot of mixed reviews on whether the yes day is a good idea or not. But having tried it, we’ve found the yes day to be more of a positive experience instead of a negative one.

The yes day gives Harrison the opportunity to think for himself. To make his own decisions and figure out what’s right or wrong and what’s appropriate and inappropriate. It helps me feel less sad about saying no as often as I do too. It’s also a lot of fun. Harrison has a pretty wild imagination, so he always comes up with ideas of what to do that I would never have thought of before. Plus, saying yes instead of no without any limits or restrictions – even if just for one day – is actually quite freeing! 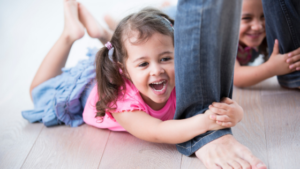 But will it work for you?

Only you can decide that! It may seem like a cop out, but until you’ve tried it, you won’t know. If you do decide to do it just be sure to set some ground rules first – who knows what they might ask you otherwise! Make sure you have plenty of coffee at the ready too…you’re going to need it! And if you don’t like it, it’s just one day and you don’t have to do it again!

That’s it for this post! Have you tried a Yes day? Has this post inspired you to give it a go? Let me know in the comments!

Join my community and receive weekly emails packed full of motivation, inspiration and reassurance that you’re not alone on this parenting journey. As an added bonus, you’ll gain EXCLUSIVE access to my FREE Resource Library. Inside you’ll find tons of cheatsheets, checklists, printables and workbooks all designed to help you make family life LESS stressful and MORE enjoyable. Simply fill in your details below and I’ll add you to my mailing list! 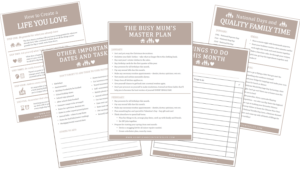 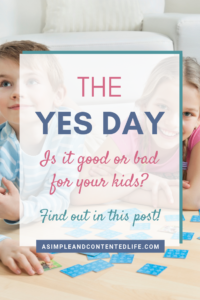 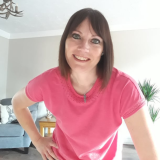